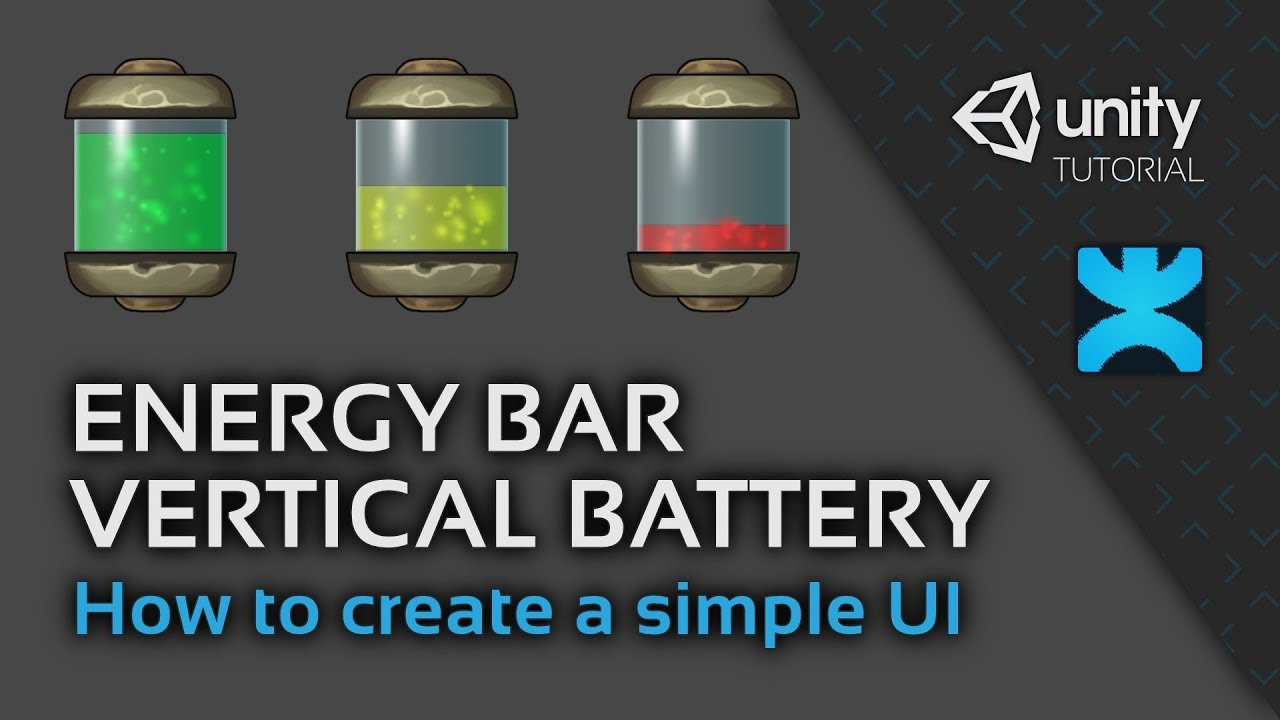 In this tutorial session with Alexandru Mares, we will explore how to create a simple UI in Unity, using only DoozyUI. DoozyUI is designed to allow new users to create custom animated and functional User Interfaces in Unity, without having to create a complex UI manager. You will learn how to create animated panels (UIElements) and animated buttons (UIButtons) that will help navigate through your UI.

In the previous videos you’ve learned how to create a simple health bar and how to collect and display stars in your UI. Now we will get into more advanced techniques and show you how to create a vertical energy bar that looks like a battery. You will use a mecanim animation, a particle system with the UI and a slider, in order to create a polished looking energy battery.

We hope that you enjoy watching the ‘Energy Bar Vertical Battery” video tutorial for Unity.

DoozyUI is a complete UI management system for Unity. It manipulates native Unity components and takes full advantage of their intended usage. This assures maximum compatibility with uGUI, best performance and makes the entire system have a predictable behavior. Also, by working only with native components, the system will be compatible with any other asset that uses uGUI correctly.

Easy to use and understand, given the user has some basic knowledge of how Unity’s native UI solution (uGUI) works, DoozyUI has flexible components that can be configured in a lot of ways. Functionality and design go hand in hand in order to offer a pleasant user experience (UX) while using the system.

Artists and designers can realize their creative vision without coding by creating blazing fast user interfaces with any animations they can imagine.

Programmers can add a powerful UI management system to their toolbox that can be interfaced with scripts or used alongside Playmaker for a code-free UI solution.

It comes with an UI Animator System that uses math-based tweens creating reliable resolution independent animations and an Orientation Manager that allows anyone to create views for both portrait and landscape modes and not have to worry about which view should be active.

It supports all platforms and is extensively optimized to minimize its memory usage. Full C# source code, dedicated support and YouTube tutorials are available to help anyone understand and then master the system.

Requires DOTween or DOTween Pro to be imported and setup in the project before importing the DoozyUI package.

:: Quick Setup!
Setup is incredibly fast and easy, just plug and play. Intuitive controls mean fast tweaks and optimal workflow, so you have more time for the important stuff.

:: Resolution Independent!
The UI Animator calculates all the resolution and aspect ratio changes and adjusts the animations accordingly. Because of this all the animations look and feel the same in both Landscape and Portrait Modes.

:: Save Time!
Save your animations and load them in other projects. (asset files)

:: Fun!
Create all kinds of animations in Play Mode, save them and use them in any project. (with DoozyUI)

:: UI Effects!
Use ParticleSystems inside the UI to create unique designs.

:: Easy!
Create intuitive menus without writing a single line of code with a WYSIWYG approach.

:: Total Control!
Fine tune all the animations settings from timings, to delays, to ease functions.

Supports all export platforms with excellent performance for mobile games.

As game devs ourselves, we are dedicated to continually improving and expanding DoozyUI, based on everyone’s feedback, and providing top-notch support.